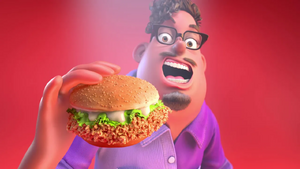 So do you know that weird Grubhub ad that's been circulating around the internet recently? Of course you do it's everywhere. You've probably seen something on Reddit, Discord, or even in your Youtube recommended page. It's the source of a lot of "ironic humor" right now. For those who don't know, Grubhub is a food delivery app. Just find what you want, order it, and someone will bring it to your house in about a half hour. Simple as that. Well, a couple months ago, they released this ad called Delivery Dance and needless to say, it's pretty cringe. But it got me fascinated. Why do people think it's so bad? Yeah sure it's pretty cringe but it's definitely not the worst ad in history. Why are people making this look like it's the worst thing they've seen.

Well I did some digging around some forums and asked around to try and get some answers. Nothing really came up. Except for one thing. This forum post that I found on some underground forum. The post came from a guest account so I don't know about any other posts they've made. They laid out this theory they had and it's pretty unnerving. He called it "The Grubhub Death Theory" and it basically states that all of the characters in the ad were dead and were in some sort of purgatory. The theory goes a little something like this:

The two sushi eaters, named Marc Jost and Wanda Nelly, were a married couple. They were happily married together in their late 20s. They had a simple flat in New York City and were living a pretty decent life. Wanda was a waitress at a restaurant and Marc was a businessman. Everything was going pretty well until one dark Friday night. After going out to a sushi restaurant and bar hopping for a while, they decided to walk home instead of calling a cab or an Uber. They were walking down the sidewalk, with no one else in sight. Unfortunately for them, this would be their last night together as unbeknownst to them, they had wandered into gang territory.

A group of men, approximately four of them, jumped out from a dark alleyway and gunned them down. All of the men fled the scene before anyone else could arrive. Wanda died instantly but Marc somehow survived and that was how police were called that night and how the police found out it was about four men. He was able to call them from his cellphone. Marc would be rushed to the hospital but died three days after due to complications from the incident as doctors were unable to stop the internal bleeding.

The salad girl, named Nancy Weiss, was living in her late thirties. She was married to a man named David Caper. They were living their relatively quiet lives in Minneapolis, Minnesota. Nancy was a cashier at her local supermarket and David was a car mechanic. All was going well until Nancy started to notice something. David would be on his phone constantly, barely paying any attention to Nancy. Every time Nancy saw David, he would either be on his phone, or putting his phone away, quickly. One day, on a Wednesday, Nancy had just woken up. David had already gone to work when she noticed that he had left his phone on his nightstand. Thinking that she could return it to him, she picked it up and found something, peculiar. David had three text messages all from this girl named Sandy. Nancy brushed it off as thinking as it was a friend from work.

When David got home, she asked David about Sandy. David got a bit nervous and said that it was a friend from work. However, Nancy could realize something was wrong. She kept pressuring him to tell the truth and finally he gave in and told Nancy that Sandy was his mistress and had been going behind her back for the past three months. Nancy got upset and kicked David out of the house that night and he went to go spend the night at Sandy's house. The next few months were David and Nancy divorcing and David moving his things out of the house. Nancy fell into a deep depression after David left. She started to feel insecure about herself. So, she started eating. She ate a lot over the next few months. Five months after she divorced David, Nancy was diagnosed with Type 2 Diabetes and died from complications three years later.

Natalie Sanchez was a teacher from Salt Lake City, Utah. She loved her students. She taught 3rd grade math at Michael Ryans Elementary School. She was married to Matthew Saunders, a worker at a local fast food chicken restaurant. The two had a two room apartment and were going well. That was until Natalie became pregnant. Being as they were going to have a new addition, they decided to move. They moved into this three bedroom, two bathroom house, in a suburb about ten minutes from the school. Natalie and Matthew were excited for the baby's arrival, mainly because Natalie has always been wanting children of her own and finally she was going to have one. As her bump started to grow, of course, more of the children in her class started to realize and ask questions. Eventually, around the time of her being four months pregnant, she announced to the class that she was pregnant. Of course, the children asked more questions and she answered all of them.

Well, tragedy struck one Saturday afternoon. Natalie was about 7 months pregnant around this time. She was watching TV in the living room when Natalie noticed she wasn't feeling well. Her stomach started aching and she was feeling dizzy. Then, she felt a wet, warm patch on the couch. At first she thought that she had peed herself but when she looked down, she did not see pee. Rather, she saw blood. Natalie shrieked and Matthew came rushing down from upstairs, shrieking after seeing the patch of blood on the couch, now dripping onto the floor. He took Natalie and put her in the car and started driving to the hospital. He was going down the road, quite fast, when he ran a stop sign. Another car, on the passenger side, struck the car, which caused it to go flying to the other corner of the road. The person in the other car survived but the two, not so lucky. The two were rushed to the hospital and Matthew survived as he had only a broken pelvis and leg. Natalie on the other hand, died on impact. As soon as the car hit, her spine practically split into two, which killed her instantly. Even worse, doctors were unable to save the unborn baby as it too, had died. Doctors confirmed that shortly before Natalie's death, that she had suffered a stillbirth. Matthew fell into a deep depression after this. He stopped showing up to work and was eventually fired by the restaurant. He fell into a deep pit with alcoholism, a pit that he would eventually succumb to, when he took his own life, nearly 5 months after the crash.

Now you're probably thinking, how does the chicken sandwich man fit into this? Well, the man, is Matthew Saunders. I'll explain this now.

The sushi that Marc and Wanda are eating represent the sushi restaurant that they ate at, shortly before they went bar hopping. The salad that Nancy is eating represents her diabetics, as she is trying to lose weight now that she has died, afraid that she would succumb to the same fate in the afterlife if she did not change her diet. The iced coffee Natalie is drinking represents her favorite drink, an iced mocha latte. The chicken sandwich Matthew is holding represents the place he worked at.

Now for the little boy, it is unknown definitively, how he fits into this however, the poster speculated that he is Natalie and Matthew's unborn son.

Retrieved from "https://cjaymarch.fandom.com/wiki/The_Grubhub_Death_Theory?oldid=15272"
Community content is available under CC-BY-SA unless otherwise noted.