Do you like drinking milk? Did you know milk comes from cows? Well, I have one fear, And that is milk loss. Fuck! Where did my mind go? Alright, Let's get this overwith. Have you heard of Molly of Denali? It's a show on PBS Kids that features a 10 year old alaskan girl who discovers what it's like in the state of Alaska. Well i'll have you know that I was one of the designers of the show.

Anyways, My name is Jenny Foxworth. In fact, I was an intern at PBS working closely for Molly of Denali. I worked as a co writer making up ideas for the next episode. It wasn't until I got fired for making a secret episode where Molly and her friends go skinny dipping because of nudity.

So I began working at Taco Bell which was in Fruitvale, CA. I was a person working at the counter taking people's money and serving their food one by one. I moved to California because life with Winston was hard. My parents have been on the longest vacation there has ever been.

One day, I was going to my new house I rented myself. I did not have to pay any bills because I was only 7. While walking, A person in a red shirt asked if they would like to give away a free DVD to me. I said yes and simply declared okay.

I ran down to the goodwill and bought a vintage DVD/VCR combo that costed 8 dollars. I went home and hooked it up to a TV that I bought a few days ago. Before I began the DVD, I heard a knock on the door. When I opened it, There were some bashir rebels from the country of Somalia claiming that they wouldn't want me to watch whatever was on the DVD.

I decided to declare fuck it and slammed the door on one of the bashir rebels feet. I began watching the DVD and what was on it was an episode of Molly of Denali. The intro seemed quite normal. The title of the episode was called, "The Lost Episode."

“Oh boy! Can’t wait to see what’s in the episode!” I said to myself. The episode started with Molly livestreaming on her computer like she would do most of the time. However, She seemed very angry with her arms crossed. For some reason, Molly sounded like Alex Jones. She said, “Everyone on YouTube claims that 6 year old girls have a tiny penis!” What? That is not true! Why would Molly even say that on a kids show? This is probably why the FTC sued YouTube and Google.

Molly then gave the middle finger then claimed, “I’ll have you know that one of my friends named Trini saw a movie called When Father Was Away On Business and saw that one of the young girls had a small weiner!” Just then, One of Molly’s family members came in telling Molly to get the fuck over it. She then punched her mother and went outside with the webcam still on.

Next it showed a scene of Tooey and Molly playing basketball while having some sort of discussion. Then Molly’s grandpa who sounded like another country old man said something that interested me. “Guess what Molly! I just told Donald Trump to destroy the crap out of North Korea and Iran, And were going to have an anniversary for their deaths!”

Next it showed some picture of a lizard person in a president suit. This proved my mystery. Lizard People are just photoshopped. It went back to the episode and showed the Denali Trading Post at night with a few lights on. It faded to show Molly staring at her window with Terminator glasses. She is now in her normal voice and says, “Why is humor real?”

I guess she never knew what it was until now. I mean, Humor has been a real thing ever since. Molly decides to jump out the window. I took the DVD out as soon as I saw it. I could tell that the bashir rebels were outside so I told them that they were right about the DVD.

I went to the PBS studios and told my boss Superintendent Chalmers about what I picked up. He claimed that it was one of his scrapped episodes that were purposely made. And he told everyone at the studio to never watch it because it was too crazy.

The next day, I smashed the DVD as requested by my boss. And it was never found again. 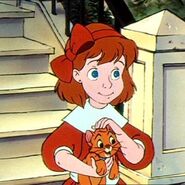 The Red Shirt Woman In The Street

Superintendent Chalmers (My boss)
Add a photo to this gallery
Retrieved from "https://cjaymarch.fandom.com/wiki/Molly_of_Denali:_The_Lost_Episode?oldid=10854"
Community content is available under CC-BY-SA unless otherwise noted.